The Magic of Mexico Attracts Millions of Tourists

In 2017, Mexico hosted over 39 million foreign travelers, making it the 8th most popular country for tourists to visit according to the World Tourism Organization. What is it that makes the country so magical? Our local experts at Destination Mexico, a Hosts Global member, believe it is a combination of the scenery, architecture, the friendliness of the people and the country’s rich heritage. Mexico’s unique character is attributed to the tremendous cultural and economic diversity distributed over a varied landscape. The places Destination Mexico highly recommends visiting are Cancun/Riviera Maya, Mexico City, Los Cabos and Puerto Vallarta/Punta Mita.

1. The Wonders of Cancun and the Riviera Maya

Cancun, on Mexico’s Yucatán Peninsula in the state of Quintana Roo, is a popular vacation spot full of modern hotels and gorgeous coastline. It is in close proximity to Mayan archaeological sites such as Chichen Itzá, one of the most notable and recognized landmarks on the Yucatán Peninsula. Cancun’s coastline is full of colorful underwater life. To get a closer look, the Interactive Aquarium is worth a visit. From touch tanks to dolphin swims to shark feedings, you’ll get up close with several underwater creatures. For a relaxing day at the beach, Playa Tortugas has white sand and crystal blue water and an array of open-air restaurants that make for great evening dining. Venturing closer to Riviera Maya, around 50 miles away from Cancun, there are some impressive cenotes such as Chac Mool and Ik Kil that will fill you with wonder.

2. The Flavors of Mexico City
Mexico City, the capital, is one of the most populous cities and metropolitan areas in the world with a blend of old and modern attractions. It is built on top of the Aztec capital, Tenochtitlan. Mexico City actually has the most museums of any city even beating out New York. The National Anthropology Museum, located in Bosque de Chapultepec, is widely considered to be the best museum in Mexico City. Aside from the museums, there is also an exploding culinary scene. Mexican cuisine is so much more than just tacos – it is as diverse as it is delicious. In the city you can find eateries that specialize in pre-Hispanic food, including dishes with insects, the question is, are you daring enough to try them? 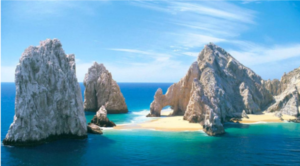 Los Cabos, located at the tip of the 1,000-mile long Baja Peninsula, is comprised primarily of two towns, San Jose del Cabo and Cabo San Lucas, which are linked by a 20-mile corridor lined with luxury resorts. Cabo San Lucas is picturesque with gold-sand beaches, sparkling blue and turquoise waters, incredible nightlife and a vast array of sea life perfect for exploring while snorkeling or scuba diving. San Jose del Cabo is famous for its beaches and colonial-style buildings. The downtown main plaza has become an art district where you can find art from all over the world. A popular attraction in San Jose del Cabo is the old Jesuit Mission, known as Parroquia San José, and dates back to the 1730s.

Want to hear more about Destination Mexico’s many service locations? Contact us to learn more!

Previous
BACK TO BLOG
Next